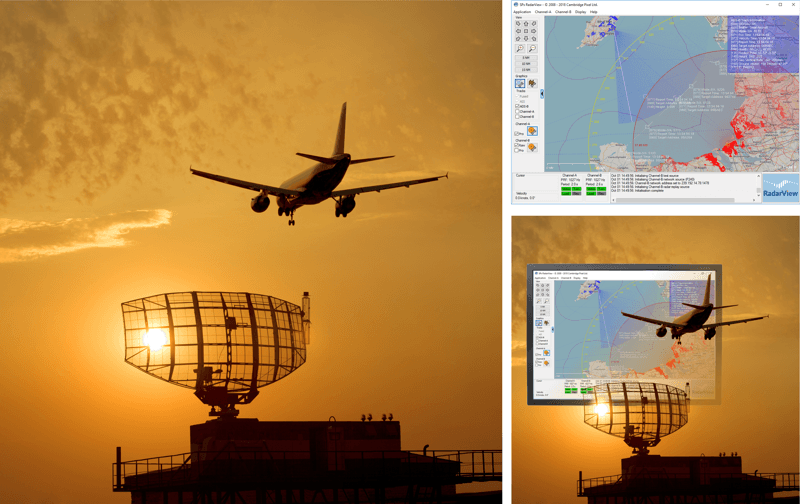 The ready-to-run PC-based RadarView display software has been optimised for the ATC market with the addition of new features including extended support for ADS-B (ASTERIX CAT-21) and surveillance co-ordination function (ASTERIX CAT-17) data. SCF messages are used to co-ordinate the operation of multiple Mode S sensors in an installation.

Cambridge Pixel has also added target detection statistics to verify radar performance so that, for example, the percentage of valid detections per scan can be viewed, and radar coverage capability is included to optimise the location for a radar or sensor based on line-of-sight visibility.

The RadarView software also now supports the next generation of Monopulse Secondary Surveillance Radars (MSSR) from companies such as Easat, Indra, Hensoldt, and Raytheon, as well as traditional SSRs.

"RadarView is already used by companies such as Saab ATM, Kelvin Hughes and leading MSSR providers for their installations as it gives them early visibility of the functionality of radars and sensors ahead of final commissioning."

RadarView allows radar video and camera images to be viewed in multiple windows using standard PC and graphics technology. The software tool receives, processes and scan converts multiple channels of radar video in normal PPI (plan position indicator) view, and, for more specialist requirements, supports B-Scan and A-Scan formats - the latter is especially useful for radar configuration and set-up. Information from Asterix messages is presented as a customisable overlay on the PPI views.

Cambridge Pixel also provides its HPx-346 card for customers that want to convert analogue radar signals, from a legacy system for example, into a standard open network data stream such as ASTERIX CAT-240.